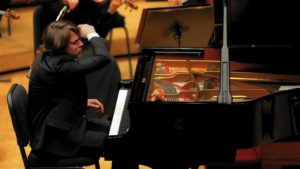 David Fray has been praised by critics for his performance at Orchestra Hall on Sunday 5th June, with an intriguing program comprising works by Bach, Boulez, Schoenberg and Brahms.

Of the concert, The Chicago Tribune wrote “David Fray closed the season of piano recitals at Orchestra Hall on Sunday afternoon with a program as intelligently selected as it was expressively played”, before describing Fray’s Schoenberg as “subtly expressive” and “a triumph.”

Chicago Classical Review described the program as “intelligent”, writing: “Fray showed himself a keyboard artist of the first order with an uncommonly intelligent recital that organically segued from Bach and Boulez to Schoenberg and Brahms.”

David returns to Europe in July with an appearance in Austria on July 14, featuring a program that includes works by Bach, Schumann and Brahms. For more concert information, please visit the Concerts page.