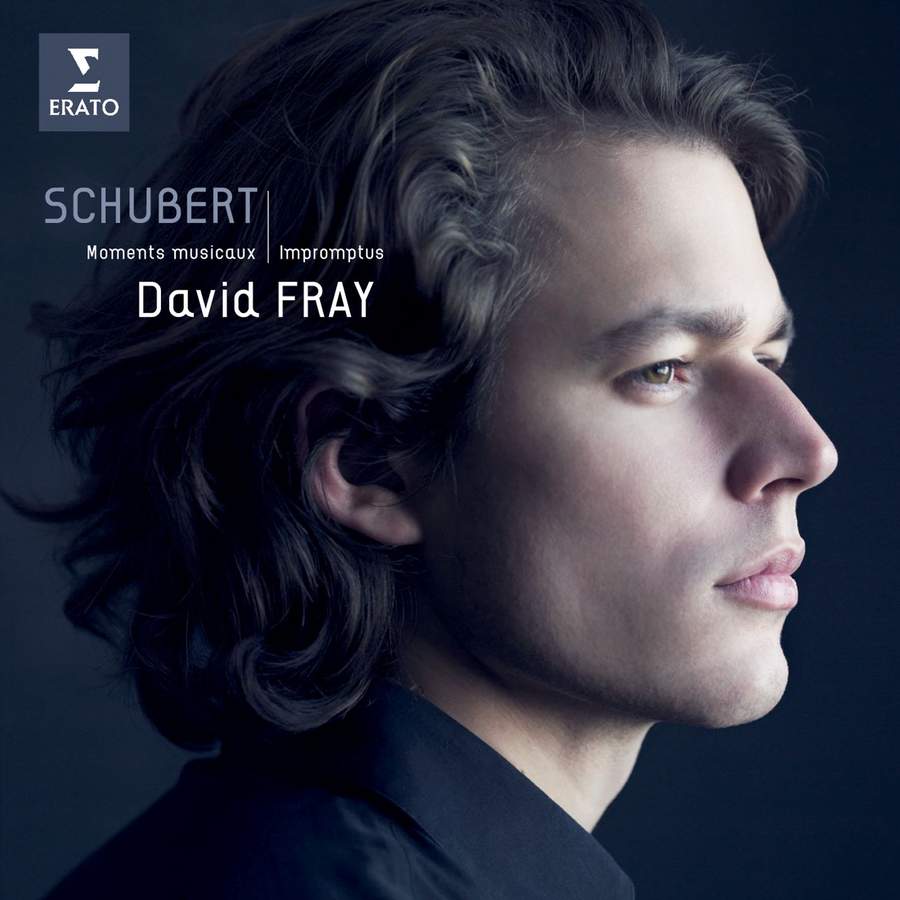 After his Bach concertos, a classical bestseller in both France and Germany, the young French pianist David Fray brings his unique sensibilities to Schubert. David Fray has already declared his particular affinity with Austro-German music, and after two CDs featuring Bach (and a DVD featuring him in Bach concertos) he now turns to the early Romantic era and Schubert, with a programme of the six Moments musicaux D780, the four Impromptus D899 and the Allegretto in C minor D915, recorded in Berlin.

His approach to the music is typically questioning and illuminating. “At the piano,” he told the French magazine Pianiste, “I try to make music like a conductor, not just as a pianist. I approach the score as if it is a reduction of a symphonic work. The piano constitutes a way of getting nearer the heart of the music. How do you balance the voices? How do you find a progression in a movement? How do you put the polyphony in place?… It’s much more interesting to study Bach’s approach to the orchestra in the Magnificat or the Christmas Oratorio than to read books on how to play Bach on the piano. Each time I approach a new score, I ask myself how the composer would have written it if he hadn’t decided on the piano. Take Schubert’s first impromptu, for instance: it starts like a reduction of an orchestral score: a tutti chord and then the melody is presented on its own, as if on a flute. Then the winds take up the theme before the strings make their entry. Most of the work comprises three or four independent lines which sing together – a cello ostinato, counterpoint harmony in the violas, say, and the winds above it.”

His recording of Bach concertos, released last November, has now sold over 40,000 copies in France and Germany, singling him out as a pianist to watch. The French magazine Le Monde de la musique said: “The interpretation is always generous, enthusiastic and rich in contrasts. The fast movements appeal with their healthy energy, exuberant humour in their finales and lyricism throughout. No moments of tension stiffen the pianist’s phrases and he gives free rein to the sound,” while the German news magazine Spiegel described Fray as “perhaps the most inspired, certainly the most original Bach-player of his generation … He discovers more psychological depth, more well-rounded stories and more refined emotions than his colleagues … His approach is lyrical, flexible, elegant and instilled with a cultivated bel canto aesthetic.”

“What’s immediately striking about his Schubert playing is its refinement, and variety of colour. In the melancholy unaccompanied theme that brings the first of the Impromptus, for instance, you can almost hear the plaintive sound of an oboe; while in No. 3 – a song without words in all but name – Fray allows the melody to sing in a genuine pianissimo, by making the inner-voice accompaniment sound like the murmur of a clarinet playing in its dark chalumeau register. This is altogether some of the most beautiful pianissimo playing you’re likely to hear… is a memorable recital, and no Schubert-lover should miss this.” – BBC Music Magazine

“a Schubert disc of the rarest distinction. …few pianists have been more acutely sensitive to Schubert’s complex inner world, one where an often pained and world-weary quality is thinly disguised by outward geniality.” – Gramophone