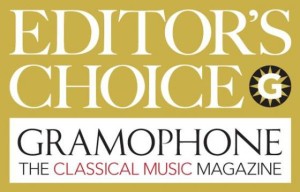 Gramophone has named David’s Schubert: Fantaisie an Editor’s Choice in their May 2015 issue.

“I wish there were more CDs of Schubert’s piano music like this – a well-planned programme but also a recital welcoming the claim of the four-hand works to be heard alongside the great solo sonatas and pieces. The duets found a market among amateur musicians in Schubert’s lifetime which continues to this day; so they are not exactly neglected. Yet we still too rarely allow them to escape their domestic associations and grant them a place among the greatest Schubert we have. They are ensemble pieces of the highest calibre, the nearest two pianists get to playing chamber music together, and they should surely be performed and listened to in the context of his piano music as a whole. How rarely we hear them in recordings that match up to their range and achieve the finish they are given here.

“David Fray has called the disc ‘The Fantasy according to Schubert’. An exaggeration, a bit of a selling point perhaps? I think not. Forget improvisations and freewheeling forms: the title is relevant to the space Schubert so often needs to attain, as Mahler put it, ‘freedom below the surface of convention’. When the G major solo Sonata, D894, was new and appeared as a Sonata-Fantasy – the publisher’s title, not the composer’s – an alert contemporary noted that ‘within its not unusual formal layout, everything internal is uncustomary and full of fantasy’.

“David Fray is alive to the way the music moves at every point and skilled at evoking worlds of sound beyond the piano. Sometimes the orchestra is close, or the voice, or the dance floor, or an impression of something floating in from outdoors, from the countryside maybe. His rhythm is immaculate, with a naturalness in matters of articulation and continuity that appears instinctive. He keeps the music airborne. Yet perhaps most admirable are his insights in the first movement. Here the character and ‘fantasy’ of this sonata is apparent in its extraordinary inspiration at the start, which has to do with the very nature of piano sound – more precisely by the piano’s capacity to prolong a simple pianissimo chord through resonance and reverberation to an echo of it, after the flick of a grace note, at the point when the original chord is dying away. No one had written for the piano in this way before.

“Jacques Rouvier was David Fray’s teacher. They make superb duettists, and I think one would have to go back to Murray Perahia and Radu Lupu – long ago – to find a far-reaching version of the F minor Fantasia, D940, as fine as theirs. Again, sound is the key, frequently determined here by associations with the orchestra and with singing, and they control it ideally in the realms of dynamics, colour and nuance. There is often a lot of it but they temper the sonorities with impeccable balancing and make you aware of how important degrees of loud and soft are in Schubert, both as volumes of sound and as indicators of character. They are bold as well as dreamlike in a piece which constantly interrupts itself and diverts the argument from its expected course. You hold your breath in the Italianate lyricism of the slow section, with its reputed reference to Paganini (‘I thought I heard an angel sing’).

“How very different is the ambition of the Allegro in A minor, D947, nearly as long with its exposition repeat as the entire Fantasia. Another publisher’s title – Lebensstürme (‘The Storms of Life’) – has stuck to it and perhaps not inappropriately. The storms of life Schubert knew a lot about, his music tells us, and their capriciousness and destabilising force seem to blow through this immense symphonic span. If you’ve never heard it in a performance as good as this it will establish Schubert for you as a four-hand master and banish, I hope, all thoughts of piano duets as a genre of uncertain standing.”